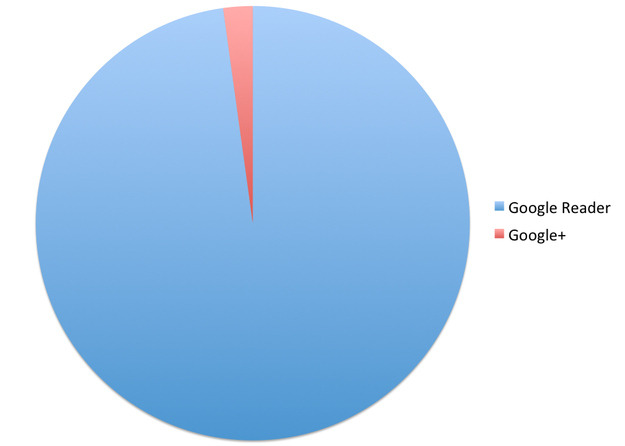 According to data from the BuzzFeed Network, a set of tracked partner sites that collectively have over 300 million users, Google Reader is still a significant source of traffic for news — and a much larger one than Google+. The above chart, created by BuzzFeed’s data team, represents data collected from August 2012 to today.

Yikes. Did Google just shut down the wrong product?

I’m less clear that the ‘wrong’ thing happened.* Google is getting slammed in Europe for grabbing headlines for Google News: why not shut down Reader (which pulls information from those agencies, to readers on a Google platform) and (if the same companies want all that traffic) force them onto Google+ so that the publishers are directly providing information to Google. With Google’s current policies could they then repurpose Google+ information that the companies provided and use that to feed Google News, thus undercutting publishers’ arguments?

In essence: could this be a play to push publishers onto Google+ and, by extension, then attract people who want publishers’ content, while at the same time trying to undermine some of the arguments in the EU about Google ‘stealing’ content?

*Don’t get me wrong. I depend on Google Reader and think they screwed up. But from Google’s perspective they might not have…