Cyber-security in 2014: What we learned from the Heartbleed bug:

Parsons warned that the fallout from Heartbleed may not be over for web users.

We still don’t know just how much information was stolen or accessed as a result of the bug. Stolen login credentials and user information is likely to be leaked by hackers, putting users at risk for additional hacks.

The problem is hackers could leak this information at any time.

“If logins and passwords were successfully extracted – and I’m willing to say 99.9 per cent of people haven’t changed all of their passwords – people still could be affected,” he said.

“Always expect at some point, possibly through no fault of your own, you will be compromised,” Parsons warned.

“Then think, ‘What would I do if my personal information was leaked?’ Thinking before these things happen can help you come up with a recovery strategy.”

Four weeks on, huge swaths of the Internet remain vulnerable to Heartbleed:

Some 300,000 systems remain susceptible to catastrophic exploits, one scan shows.

The Heartbleed vulnerabilityin OpenSSL allows a malicious TLS implementation to extract random chunks of memory from an unpatched peer. If you’re not up to speed on Heartbleed, check out the excellent documentation on that site andcheck your servers ASAPto see if you might be vulnerable.

Most of the attention around the Heartbleed attack has focused on the simplest and most obvious scenario: a malicious client attacking an HTTPS server to steal cookies, private keys, and other secrets. But this isn’t the only attack possible: a malicious server can also send bad heartbeat packets to a client that uses OpenSSL and extract data from that client. The TLS heartbeats used in this attack aresymmetric: they can be initiated by either the “client” or the “server” in a TLS connection, and both endpoints use the same vulnerable parsing code.

Importantly, even if the server that you are querying (e.g. Tumblr.com) is patched against this OpenSSL vulnerability the servers behind the front-end of the server may not be. As a result, payment gateways, agents responsible for fetching URLs, some identity federation protocols, and so forth may also be vulnerable. In Meldium’s tests, who have they announced was vulnerable?

This is just a very, very small snippet of vulnerable parties. And given how many backend systems will simply not be updated for fear of breaking compatibility (e.g. in the case of payment gateways) this will be a long-term vulnerability.

SSL: the solution to a problem that is persistently generating problems unsolvable by SSL itself.

I think the link between absurdist theatre and SSL certificate revocation checking is a (bit) tenuous, but nevertheless Dan Goodin’s article over at Ars Technica does a good job in describing (in less technical language than Adam Langley’s post) why having your browser check for revoked SSL certificates really isn’t all that effective.

Using Heartbleed, the name for a flaw in security that is used in a wide range of web servers and Internet-connected devices, the attacker was able to break into an employee’s encrypted virtual private network, or so-called VPN, session.

From there, the hacker or hackers used the Heartbleed bug about 1,000 times until successfully extracting information like passwords to get broader access to the victim’s network, said researchers at Mandiant, a cybersecurity firm.

The targeted company only noticed the attack in its later stages. When it began analyzing what happened, it realized the Heartbleed bug was used as the entry point, said Christopher Glyer, an investigator at Mandiant.

It’s a statement from Mandiant and so some mindfulness should be taken when reading their comments. (The same is true when parsing statements from other for-profit security companies.) Still, that Heartbleed is not only weaponized (that happened almost immediately after it was integrated into Metasploit) but is showing up in the wild prominently enough to warrant a response from Mandiant demonstrates why Heartbleed is going to be a problem for years going forward. For a good, if technical, discussion of why the hurt is just going to continue (like all things that involve breaking SSL…) see Adam Langley’s recent post titled “No, Don’t Enable Revocation Checking.”

Also: even if you don’t read Adam’s post you can follow the lesson he provides in the title of his technical post. If in the aftermath of the Heartbleed vulnerability you enabled Revocation Checking in Chrome then disable it, ASAP.

Chris Parsons, a post-doctoral fellow with the Citizen Lab at the Munk School of Global Affairs, said that there has been an increased call for outside security audits for OpenSSL, the security system affected by Heartbleed.

“Researchers have been grumbling that OpenSSL and other highly-relied upon security libraries need to be subject to more ‘forensic audits’ by professionals to identify and patch flaws before they are exploited in the wild,” he said.

Heartbleed was discovered by ateam of researchers from the Finnish security firm Codenomicon, along with a Google Inc. researcher who was working separately.

Missed this when it went up, but posting because I think it touches on something that is important to track as things move forward: despite experts inside and outside of industry recognizing the need for more audits of critical packages like OpenSSL, will resources actually be devoted to enable such work?

Given how many web sites were vulnerable to the Heartbleed bug, Parsons says there is likely to be a great deal of reflection on how it could have been identified sooner. Some cryptographers have estimated it may have existed for years before it was discovered last week.

This past weekend, Bloomberg News published a story alleging the U.S. National Security Agency (NSA) knew about the Heartbleed vulnerability for two years and that it may have been using it to access personal data.

The NSA denies the charge, but Parsons says it raises serious questions about the Five Eyes, the surveillance partnership between Canada, the U.S., Great Britain, Australia and New Zealand, which collaborates to detect threats such as Heartbleed.

“This is supposed to be the sort of thing that they’re supposed to find and ideally report,” says Parsons.

“I think over the coming months, we need to figure out if they knew and if they didn’t, why didn’t they, because this is what we pay them to do. And if they did know, then why weren’t they protecting us?”

If you’re interested in why it’s so hard to patch a huge portion of the Internet in secret, and what forced the (relatively) early public disclosure of Heartbleed, then this is a good article to read.

Chris Parsons nearly predicted the CRA’s vulnerability just before they decided to shut down their tax websites, while some of his colleagues and followers criticized the Canadian Cyber Incident Response Centre (CCIRC) for not alerting the public sooner, when it was already obvious the CRA was using a vulnerable version of SSL. Chris discussed the potential ramifications of the CRA’s Heartbleed vulnerability with me:

“A significant amount of highly sensitive tax-related personal information is passed through CRA’s online service gateways. A third-party could have, potentially, accessed logins and passwords of Canadians or the private keys of CRA’s services. The former set of information would let that party log into CRA and impersonate the person in question. The latter set of data could let the third-party decrypt previously captured client-server information and, as a result, decode not just passwords and logins but also the tax data that individuals provided to CRA.”

First time that I’ve been quoted (extensively) in Vice!

Source: Heartbleed Ripped a Hole in the Internet | VICE Canada 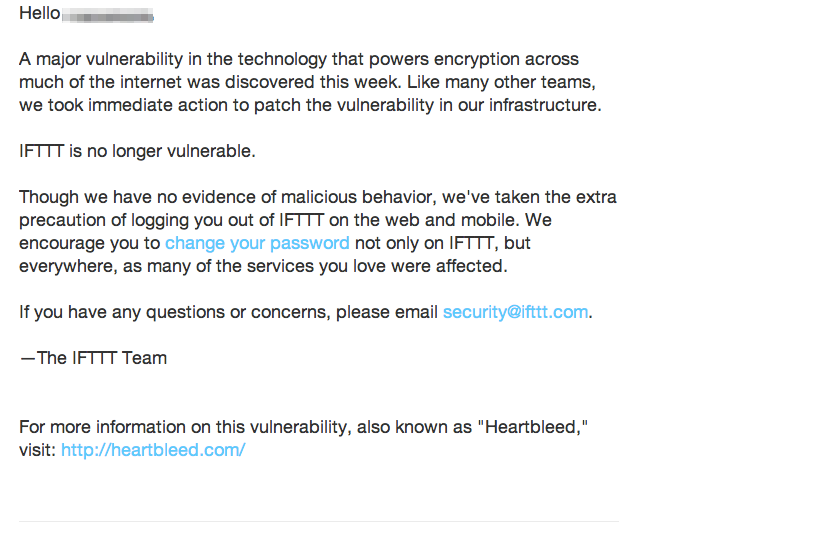 A really good example of how services can, and should, warn users about how to respond to the Heartbleed OpenSSL vulnerability.