Obama’s first director of national intelligence, Dennis Blair, wanted the CIA to use its [drone strike] capability more strategically. His reading of the intelligence suggested that the collateral harm of the operation–the anger that the strikes caused among Pakistanis, even though the targeting was precise–was damaging to U.S. security interests. The CIA, in a deft bureaucratic move, simply stopped providing Blair’s office with advance notice of strikes. The dispute went all the way to the Office of the Vice President, which sided with the CIA, although Blair “won” the ability to have a director of national intelligence representative at CIA covert action briefings at the White House.

In the name of efficiency and good long-term planning, DHS is ensuring that its Predator Drones over the USA are able to distinguish persons from animals, evaluate whether such persons are armed, and are also integrating signals intelligence systems into the vehicles. From the article:

Homeland Security’s specifications for its drones, built by San Diego-based General Atomics Aeronautical Systems, say they “shall be capable of identifying a standing human being at night as likely armed or not,” meaning carrying a shotgun or rifle. They also specify “signals interception” technology that can capture communications in the frequency ranges used by mobile phones, and “direction finding” technology that can identify the locations of mobile devices or two-way radios.

The analysis and interdiction capabilities being integrated into drones may – prospectively – be considered legal. If they are legal then it should be clear that ethical and normative (to say nothing of constitutional) claims should be brought to bear on the basis that such expansions of government surveillance are almost certain to be used inappropriately and to the disadvantage of American citizens and residents alike.

The proliferation of drone technology has moved well beyond the control of the United States government and its closest allies. The aircraft are too easy to obtain, with barriers to entry on the production side crumbling too quickly to place limits on the spread of a technology that promises to transform warfare on a global scale. Already, more than 75 countries have remote piloted aircraft. More than 50 nations are building a total of nearly a thousand types. At its last display at a trade show in Beijing, China showed off 25 different unmanned aerial vehicles. Not toys or models, but real flying machines. 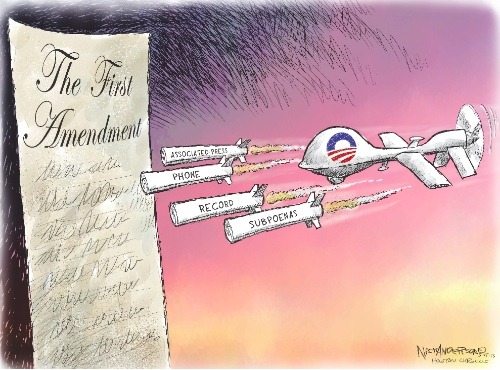 Can you file a harassment suit against a drone?

With drones, the question is how long before the dozens of states with the aircraft can arm and then operate a weaponized version. “Pretty much every nation has gone down the pathway of, ‘This is science fiction; we don’t want this stuff,’ to, ‘OK, we want them, but we’ll just use them for surveillance,’ to, ‘Hmm, they’re really useful when you see the bad guy and can do something about it, so we’ll arm them,’ ” Singer said. He listed the countries that have gone that route: the United States, Britain, Italy, Germany, China. “Consistently, nations have gone down the pathway of first only surveillance and then arming.”

It’s the creeping use, combined with perceptions of citizens’ inability to affect government behavior that, combined, arguably are provoking resistance to drones in Canada and the US.

While admitting that increased surveillance was “scary” and that governments will have to be thoughtful with their laws, [Bloomberg] seemed to side with prioritizing radical transparency, especially through the use of automated drones, “but what’s the difference whether the drone is up in the air or on the building? I mean intellectually I have trouble making a distinction.”

Lest Bloomberg be labeled as a surveillience hawk, the interview took on a tone of inevitability, rather than advocacy: “Everybody wants their privacy, but I don’t know how you’re going to maintain it.”

Correct me if I’m wrong, but his sentence “Everybody wants their privacy, but I don’t know how you’re going to maintain it” indicates a failure to understand his role as a politician. If everybody – including, one presumes, residents of New York city – “wants their privacy” then it is his job, and that of council, to protect and preserve those constituents’ privacy.

To be clear: it is not his job to authorize enhanced surveillance, and then throw his hands up and say that he doesn’t get how his constituents are going to realize their wishes as he and council march against those interests.

But documents released by the Electronic Privacy Information Center (and an unredacted version of the same unearthed by CNET) late last week show that the DHS has been doing a lot more with drones in the intervening ten years, including tricking them out with cellphone sniffing equipment, sensors that can distinguish between humans and animals, and technology that tells authorities whether someone on the ground is packing a gun.

Frighteningly, the records also show that the DHS’ Predator drones are ready to be equipped with weapons, although a spokesman for DHS sub-agency Customs, Border Protection (CBP) told CNET’s Declan McCullagh that the drones are currently unarmed. McCullagh reports that the DHS has been loaning its drones to domestic law enforcement agencies with criminal justice missions, “including the FBI, the Secret Service, the Texas Rangers, and local police.” Requests from those agencies are becoming more and more common, he writes:

The DHS told McCullagh that it isn’t using “signals interception” on its drones – yet – and that “[a]ny potential deployment of such technology in the future would be implemented in full consideration of civil rights, civil liberties, and privacy interests and in a manner consistent with the law and long-standing law enforcement practices.” But if “longstanding law enforcement practices” are any indication of where the DHS is headed, we are in trouble.

That’s because often “long-standing law enforcement practice” has been to get away with whatever it can using the loosest interpretation of the fourth amendment possible, before legislators or courts act to correct the problem (if they ever do).

* Kade Crockford, “Drones are coming home to skies near you: feel safer?”