A couple thoughts after shooting with the iPhone 14 Pro for a day, as an amateur photographer coming from an iPhone 12 Pro and who also uses a Ricoh GR and Fuji X100F.

I haven’t taken the phone out to shoot extensively at night, though some staged shots at home at night showcase how much better night mode is compared to that in the iPhone 12 Pro.

Anyway, early thoughts. More complete ones will follow in the coming week or so.

This year I took a very late vacation while Toronto was returning to its new normal. I’ve been capturing the city throughout the COVID-19 pandemic and I wanted to focus in on how the streets felt.

During the pandemic we’ve all been attached to our devices, and our phones in particular, and thus decided to document the city through the lens of our ever-present screen: the smartphone. I exclusively shot with my iPhone 12 Pro using the Noir filter. This filter created a strong black and white contrast, with the effect of deepening shadows and blacks and lifting highlights and whites. I choose this, over a monotone, as I wanted to emphasize that while the city was waking up there were still stark divides between the lived experiences of the pandemic and a continuation of strong social distancing from one another.

95% of my photos were captured using ProRaw with the exception of those where I wanted to utilize Apple’s long exposure functionality in the Photos application.

In excess of the default Noir filter, I also created a secondary filter in Darkroom that adjusted what came off the iPhone just a bit to establish tones that were to my liking. My intent was to make the Noir that much punchier, while also trying to reduce a bit of the sharpness/clarity that I associate with Apple’s smartphone cameras. This adjustment reflected, I think, that digital communications themselves are often blurrier or more confused than our face-to-face interactions. Even that which seems clear, when communicated over digital systems, often carries with it a misrepresentation of meaning or intent.

END_OF_DOCUMENT_TOKEN_TO_BE_REPLACED

Climate change is a reality of contemporary life and is leading to increasingly numbers of weather-related catastrophes. One of the many threats now facing humanity is severe flooding. Such threats have been, and continue to be, driven by harmful and destructive human activities that impair and change the climate, and amplified by housing councils that permit developers to build homes on floodplains along with other development pressures linked to humans moving in increasing numbers into urban environments.

With the climate emergency in mind, Toronto artist John Notten has created a series of styrofoam installations that are presently located in Ontario Place. On the one side they show the image of an iceberg and the other show homes, vehicles, and other urban architecture. As discussed in the artist statement, the installation is intended to offer:

… an opportunity for the viewer to consider connections between this provocative material, the image of floating icebergs, and those of half-submerged iconic institutions.

It was particularly special to have a pair of kayakers visit the exhibit at the same time that I was there. Their presence—and my effort to present them as blurred subjects—helps to give a sense that climate change affects all subjects—all people—and isn’t something that is linked to any one specific subject. In essence, I wanted to convey that all humans are threatened by climate change and that focusing on individuals and their efforts does not adequately appreciate the structural and collective drivers that endanger all life on Earth.

Over Flow will be in Ontario Place until October 31, 2021, and will then be moved to other locations in the spring of 2021.

All images were made using an iPhone 12 Pro and the Noir filter, and then slightly edited using a filter in Darkroom.

The history of Canada is linked to settle colonialism and white supremacy. Only recently have elements of Canada come to truly think through what this means: Canada, and settler Canadians, owe their existence to the forceful removal of indigenous populations from their terrorities.

Toronto is currently hosting an art exhibit, “Built on Genocide.” It’s created by the indigenous artist, Jay Soule | CHIPPERWAR,1 and provides a visual record of the link between the deliberate decimation of the buffalo and its correlation with the genocide of indigenous populations. From the description of the exhibit:

Built on Genocide is a powerful visual record of the 19th-century buffalo genocide that accompanied John A. MacDonald’s colonial expansion west with the railroad. In the mid-19th century, an estimated 30 to 60 million buffalo roamed the prairies, by the late 1880s, fewer than 300 remained. As the buffalo were slaughtered and the prairie ecosystem decimated, Indigenous peoples were robbed of their foods, lands, and cultures. The buffalo genocide became a genocide of the people.

Working from archival records, Soule combines installation and paintings to connect the past with the present, demanding the uncomfortable acknowledgement that Canada is a nation built on genocide.

What follows are a series of photographs that I made while visiting the exhibit on October 13, 2021. All images were made using an iPhone 12 Pro using the ‘Noir’ filter in Apple Photos, and subsequently edited using a Darkroom App filter.

Canada is, and needs to be, going through a reckoning concerning its past. This process is challenging for settlers, both to appreciate their actual histories and to be made to account for how they arrived at their current life situations. There are, obviously, settlers who are in challenging life situations—som experience poverty and are otherwise disadvantaged in society—but their challenges routinely pale in comparison to what is sadly normal and typical in Canada’s indigenous societies. As just one example, while poverty is a real issue for some white and immigrant Canadians, few lack routine access to safe and clean drinking water. None have lacked access to safe and clean water for over 26 years but this is the lived reality of indigenous populations in Canada. 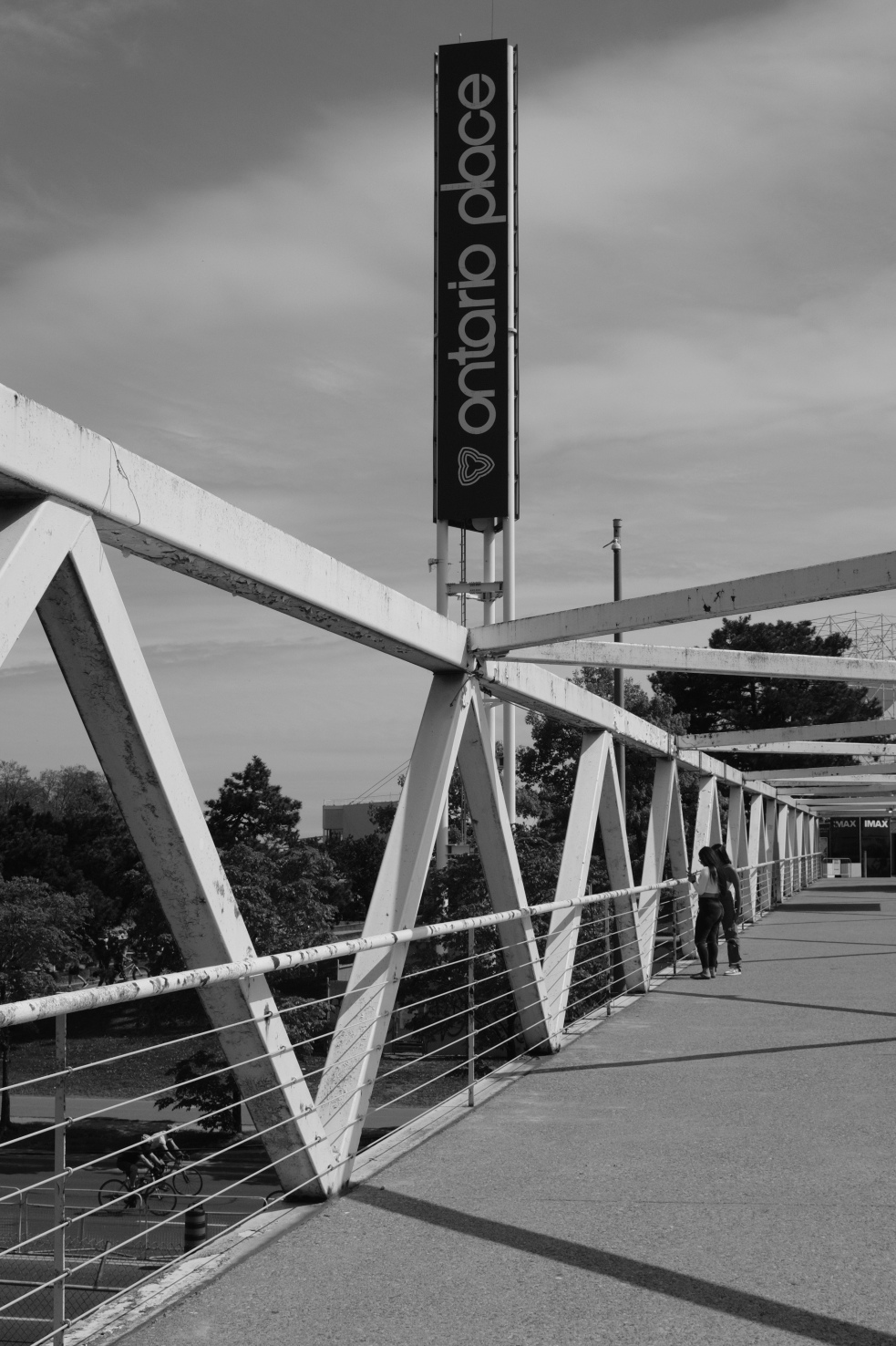 Toronto is home to Ontario Place, which was once a park that had splash pads, rides, a Legoland, and more. It was opened in 1971 and hugs Lake Ontario. It was closed in 2012 for redevelopment and, since then, has largely languished as successive governments have suggested ideas but none have come to fruition. Ontario’s official motto is “A Place to Grow”, and by extension Ontario Place itself is a place that has since grown up and is now slowly wasting away due to government neglect.

It’s also one of my favourite places in the city to visit and photograph, and especially during the pandemic when it has been relatively quiet and free of people. It’s both a very calming location and one that has very interesting buildings and urban ruins to photograph.

It’s getting warmer in Toronto which means that people are inclined to be outdoors; there are more cyclists and skateboarders in Toronto than I think ever before, and they’re all using the paths that are typically used predominantly by people who are walking or jogging.

Each year, I’ve managed to find or access or photograph a new part of the park that’s succumbed to lack of upkeep, and this year is no exception. An enterprising soul laid down some boards to cross over into part of the flume ride which meant I could see it for the first time! I suspect that it’ll only be a matter of time until a provincial government finally gets its way and tears down these ruins.

I’m sure that more and more people will be using the park this year it’s limited attractions, and especially as more Torontonians get vaccinated. While I’ll miss feeling like the park is my own, it’ll be terrific to have another part of the city return to normality.

(All photos shot using an iPhone 12 Pro and Fuji x100f, and edited using my presets in Darkroom.)

One of the best pandemic purchases I’ve made has been a HomePod Mini. One of the many reasons that I’ve liked it is I can use a Home automation to set a playlist or album to wake up to. This corrects an annoyance with the iPhone’s Alarms app, where you need to download a song to your device to reliably use it as an alarm.

However, I recently got a new iPhone which broke my alarm automation. I couldn’t figure out what was going on: I deleted and re-created the automation a few times and totally restarted the HomePod Mini. Neither of these actions helped. Not only did the automation not work at the designated times but the automation wouldn’t even work while using the test feature.

The settings for the automation were:

No matter what I did, the automation never fired. However, I figured out that as soon as I disabled the location-specific triggers the automation worked. This helped me to start narrowing down the problem and how to correct it.

You see, when I moved all of my data to my new iPhone it failed to transfer a setting that told the Home app to use my iPhone as the location to from which to trigger events. As a result, setting an automation to only fire when I was home couldn’t work because the device which had been triggering the Home automation (i.e., my old iPhone) wasn’t never geolocated to my network. You can fix this, however, by opening: Settings >> Privacy >> Location Services (On) >> Share My Location >> My Location (Set to “This Device).

Now that the Home app knows to use my iPhone’s location as the way of determining whether I’m at home, the trigger fires reliably.

Ran into a weird iPhone 11 Pro issue today. When I took it off it’s charger this morning it registered as draining down the battery at a rate of around 1% every couple of minutes and couldn’t detect all the AirPlay 2 devices in my home. After rebooting the phone I went from 78% to 94% battery and could connect to everything around me. So utterly random!

For the last few weeks I’ve been jarred awake by an overly loud alarm; it didn’t seem to always be so loud, but maybe I’d forgotten?

Nope. Not the case at all. When I updated to iOS 13.4 it set my ringer and alarm volumes to 100%. Now that I’ve reduced the volume I’m hopeful that my wake ups will be a lot more peaceful than they’ve been for the last few weeks.

To change the volume of the built-in Apple alarm: Go to Settings > Sounds & Haptics. Under Ringers And Alerts, drag the slider left or right to set the volume. As you drag, an alert will play, so you can hear how the volume changes. Turn on Change with Buttons to use the volume buttons on your device to change the alarm volume.